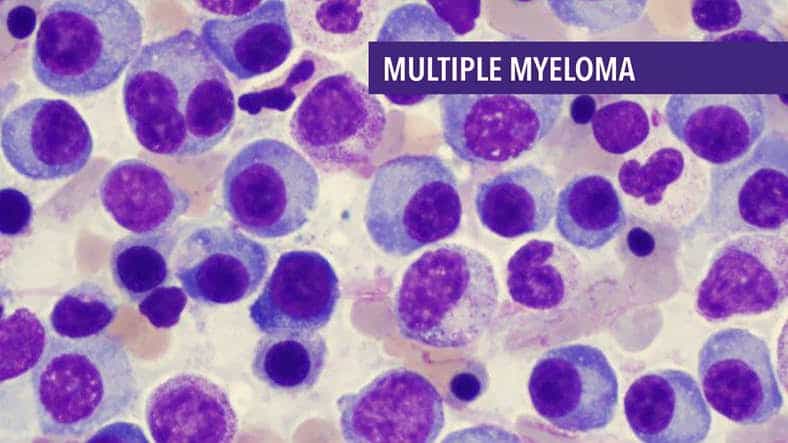 Multiple myeloma is a cancer that attacks plasma cells, a type of white blood cell capable of fighting infections by producing antibodies, which respond by attacking germs. In the case of multiple myeloma, cancerous plasma cells occupy the bone marrow, organizing themselves to drive away healthy cells. In practice, instead of producing useful antibodies, cancer cells produce abnormally behaving proteins. The type of treatment envisaged depends on the developmental stage of multiple myeloma: if it shows a slow growth rate (and does not give rise to particular symptoms), only a thorough monitoring, rather than a real immediate treatment, may be recommended. In cases where treatment is shown to be necessary, there are various options available to control the disease.

Some patients with multiple myeloma have no symptoms at all. Others may have common symptoms of the disease, which will unfold their effects on the bones, blood, and nervous system.

Bones: pain in the back, hips and skull; weakness, either all over (osteoporosis), or close to a plasmacytoma; broken bones (fractures) resulting from minor injuries.

Low blood counts: deficiency of red blood cells, white blood cells and blood platelets, a common symptom in multiple myeloma, can lead to other symptoms, such as anemia (low red blood cell count leads to weakness, dizziness, shortness of breath, reduced physical stamina) , leukopenia (too few white blood cells are unable to respond to infections, such as pneumonia) and thrombocytopenia (there are few platelets in the blood, with possible severe bleeding due to even minor injuries).

High levels of calcium: they can cause several problems: an extreme thirst (need to drink a lot) driving to massive urinating; dehydration; kidney problems (sometimes a kidney failure); constipation; abdominal pain; loss of appetite; genarl weakness; feeling drowsy; confusion. With higher levels of calcium, patients can even slip into a coma.

Nervous system: As the spine weakens, bones can collapse putting pressure on the spinal cord and nerves. This can cause sudden severe back pain, a feeling of numbness in the legs, muscle weakness. The spinal cord compression is a medical emergency, which can lead to the possibility of permanent paralysis, so you should contact your doctor immediately or go to the emergency room. Besides, a peripheral neuropathy (when abnormal proteins produced by myeloma cells are toxic to the nerves) may lead to weakness and numbness.

Among other recurrent symptoms, we also remember blood hyperviscosity, a “thickening” due to the presence of huge amounts of myeloma proteins. By slowing blood flow to the brain, it can cause: dizziness and confusion; stroke symptoms (weakness on one side of the body and slurred speech). A prompt medical attention, called plasmapheresis, removes the protein from the blood and quickly solves this problem.

Age: most people diagnosed with a multiple myeloma are in their 60s.

Male sex: Men are more likely to develop the disease than are women.

Black race: Black people are more likely to develop multiple myeloma than are people of other races.

Personal history of a monoclonal gammopathy of undetermined significance (MGUS): Multiple myeloma almost always starts out as MGUS, so having this condition increases your risk.

Choosing a hearing aid isn’t easy, especially if you’ve never used one. They come in different shapes, colors and levels of technology.The first factor in determining which hearing aid to choose is your hearing loss, which could range from very mild to severe. Next, you need to know what you would like it to be… END_OF_DOCUMENT_TOKEN_TO_BE_REPLACED

Small lymphocytic lymphoma (SLL) is a cancer of the immune system. It affects infection-fighting white blood cells called B cells. SLL is a type of non-Hodgkin’s lymphoma, which along with chronic lymphocytic leukemia (CLL) indicates the same type of disease, treated the same way. Whereas in SLL, the cancer cells reside primarily in the lymph… END_OF_DOCUMENT_TOKEN_TO_BE_REPLACED

Diabetes Epidemiology Diabetes is a very common disease. New updated data from the new International Diabetes Federation (IDF) Diabetes Atlas show that more than 34 million Americans have diabetes (1 in 10 individuals), of whom approximately 90-95% have type 2 diabetes. In UK the situation is slightly better: with nearly 4 million sufferers, about one… END_OF_DOCUMENT_TOKEN_TO_BE_REPLACED

Small lymphocytic lymphoma (SLL) is a cancer of the immune system that affects the white blood cells that fight infection, called B cells. SLL is a type of non-Hodgkin’s lymphoma, as is chronic lymphocytic leukemia (CLL). Both cancers are basically the same disease, and are treated in almost the same way. The difference between the… END_OF_DOCUMENT_TOKEN_TO_BE_REPLACED